Moroccan Solar Plan Sees Path Forward, With or Without Desertec 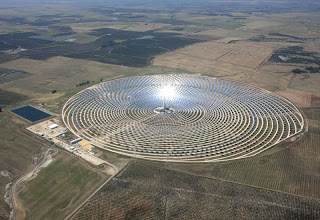 If the news of the last month and a half is any indication, the likelihood of finally kick-starting the Desertec renewable scheme in North Africa had become more elusive than even critics once thought. Facing wavering support from vital shareholders and a small, but significant exit of two of the program's largest corporate backers, the green energy plan emerged from the month battered by the press and familiar critics alike. If the rush of articles that surrounded them were to be believed, the beleaguered green power scheme had faltered and threatened to take the region's renewable fortunes down with it.
However, as the smoke clears, it appears that Desertec's organizational setbacks are having little effect on the health and stability of North Africa's green energy sector. Instead, reports show that investment has continued to pour in, shifting the focus in the eyes of some to where new energy development belongs - at home.
Imagined as a renewable energy pipeline, linking the seemingly endless solar power of North African with the European marketplace, the Desertec plan has faced a steady stream of doubt from those who think the price of such a plan would far outweigh any immediate - or long-term for that matter- benefit. Even in the best of times, the proposed cost of the plan would be difficult plan to sell, but considering the fiscal limitations of much of Europe and the sad state of affairs when it comes to confidence in the region's green power sector, its become a fantasy in the eyes of some. A well intentioned fantasy, but a fantasy all the same.
This past month, the plan's status took a further beating when Spain decided not to sign on in support of one of Desertec's anchor projects, a 150MW solar plant outside of Ouarzazate, Morocco. Announced at the last minute, Spain's withdrawal knocked the foundation out of the effort, as the country's participation was pivotal to creating a Euro-bound pipeline from Morocco. Shortly after, Desertec took two more hits when Bosch and Siemens announced that they would be pulling out of the project, with the latter suggesting they would be leaving the solar sector all together. The Siemens announcement owes much to the weakened solar industry across Europe and in Germany thanks to sharp cuts in government support and the dumping of low-cost components from China, making competition next to impossible.
With representatives from both Desertec's Industrial Initiative (Dii) and Foundation insisting that last month's developments would have minimal effect in a broader context, the media familiar critics pounced. This was just further proof that the plan was not feasible, they argued, and would be unable to attract the investment needed to get even foundational, anchor projects off the ground.
However, shortly after Spain's announcement, news began to emerge of production agreements and funding programs that suggested that instead of faltering, the Moroccan plan has not missed a beat - if not necessarily alongside Desertec.
With the Desertec plan in limbo, Morocco announced $380 million in early funding for a 160MW concentrated solar plant in the same region had been secured thanks to a trio of European lenders. While still far short of the estimated 1.04 billion euros the project is expected to cost, the funding allowed the Moroccan Agency for Solar Energy to sign a deal with Saudi Arabia's ACWA Power to oversee the project.
More importantly, the move was a vote of confidence in the country's renewable plans. With contributions from the European Investment Bank, the French Development Agency and Germany's KfW, the funds add to those already dedicated to the project from the World Bank, the European Union, the African Development Bank and most importantly, the Moroccan government.
While important, the vote of confidence from Rabat is not unexpected considering the government's strong support for renewable options. With little in the way of proven oil or gas reserves, Morocco outlined a $9 billion green power strategy in 2009 with the aim of providing 2GW of solar capacity by 2020, as well as significant contributions from wind and bio-fuel alternatives. The Ouarzazate is expected to expand to provide 500MW within the next few years.
Additionally, the Ouarzazate project is intended to address domestic demand, which is expected to significantly rise over the coming years, rather than focus on export options. This focus on domestic demand above external markets is welcome news to those hoping to avoid extraction-heavy strategies when it comes to energy development.
Publié par uberal à 10:48