Morocco Finalises Platform for New Oil Port in the Med

December 12, 2012 [TankTerminals.com] - 5 years after launching a first flagship project, Tanger-Med, last Monday Morocco announced the launching of a new port platform in the Mediterranean sea for the handling of petroleum products in the Nador region (north of the country). 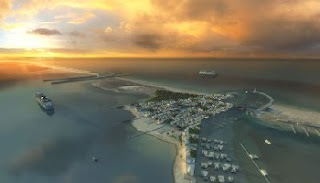 This new project, with a budget of at least 7,500 millions of dirhams (673 millions of euros), was announced at a ceremony presided by king Mohammed VI and attended by the Prime Minister, Abdelilah Benkirane, according to MAP agency.
Named "Nador West Med", the future integrated port complex should be built on 850 hectares, in Betoya bay (close to Nador). It will have a first phase lasting 5 years, according to the same source.

This initial phase, costing 5,900 million dirhams (530 million euros), includes the construction of a deep water port with terminals dedicated to petroleum products and other bulk goods. “This project will be designed to handle large tankers for refined hydrocarbons and crude”, declared the general manager of the National Ports Agency (ANP), Nadia Laraki, quoted by MAP. Finally, it will be equipped with four or five beths, she added.

The target of this future "mega-platform" for petroleum products storage is not only supplying Morocco, but also other countries in the region. This is part of a port strategy for 2030 having a total budget of 60,000 million dirhams (5,400 million euros) and planned around 6 ports, including Tanger-Med. Opened in 2007, this jewel of Morocco’s economy has the target of fostering sea transport, overall containers, and competing with the Spanish port of Algeciras.

Sea-borne traffic represents more than 90% of the Morocco’s foreign exchanges.